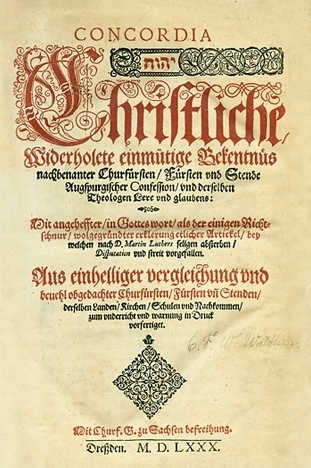 Saints Peter and Paul Evangelical Lutheran Church U.A.C. is a confessional, liturgical independent Lutheran congregation, firmly committed to upholding the truth of the Holy Scriptures as confessed in the Lutheran Book of Concord of 1580. We are affiliated with the Evangelical Lutheran Diocese of North America (ELDoNA).

We believe that the Bible is the One, True, Triune God’s special revelation of Himself to the world, given by inspiration of the Holy Spirit of God, and is therefore free from errors and mistakes. These Holy Scriptures reveal all we need to know and believe about the Triune God — Father, Son, and Holy Ghost — to be saved, and is the only source and foundation of doctrine for Christians.

We believe that Jesus Christ is true God, begotten of the Father before all worlds, and true man, born of the Blessed Virgin Mary, Who took on human flesh in order to deliver mankind from sin, death and the power of the devil. He truly died for our sins and was truly raised from the dead for our justification. By His perfect life of obedience to the Law and will of His Father and by His sacrificial death on the cross, He has made satisfaction for the sins of all men and has earned righteousness and forgiveness for all, so that all who trust in Him are forgiven, justified, saved, and made heirs of eternal life.

We are a sacramental Church. In other words, we acknowledge that, although God is everywhere, He has chosen to locate Himself for us on Earth, with His grace and forgiveness, in the ministry of Word and Sacrament, that is, in the preaching of the Gospel in its truth and purity (the message of salvation through the grace of our Lord Jesus Christ alone) and in the administration of the Blessed Sacraments according to Christ’s institution. We confess one Holy Baptism for the remission of sins, which is God’s “sacred act” by which He drowns the old sinful Adam in us, and raises us out of the waters as a new creation, and clothes us with the righteous works of our Lord Jesus Christ. We also celebrate every Sunday and Festival Day the Lord’s Supper, which is God’s “sacred act” by which He feeds His children with the true and substantial Body and Blood of the Lord Jesus under bread and wine for the forgiveness of sins. Holy Absolution is another divinely instituted “sacred act” in which God speaks the Word of forgiveness to penitent sinners through the mouth of His called servants (i.e., pastors), to whom God, through the Church, has entrusted the Keys of the Kingdom of God. Absolution is offered both corporately and privately.

Christians in every age have found it necessary to summarize and explain their beliefs, especially because many false teachings about the One, True, Triune God have arisen, both inside and outside of the Christian Church. Even much of “Lutheranism” around the world is plagued with false teachings and with churches that use the name “Lutheran,” but bear little resemblance to the historic definition of the word. Originally, “Lutheranism” did not portray itself as one “option” or one “tradition” among many. Instead, Lutherans (at the time of Martin Luther, AD 1483-1546) simply wished to teach and practice what the Christian Church had always taught and practiced, minus any aberrations to the right or to the left of Holy Scripture. We describe ourselves as “Lutherans,” because we still fully subscribe to the Lutheran Confessions, as contained in the Book of Concord of 1580, because they accurately express the true Christian, catholic and historic faith of Christ’s Church, as taught in the Bible. Therefore, we seek to ensure that all of our doctrine and practice conform to the standard of Scripture and the Confessions. We still confess, with the Book of Concord, that the chief article of the Christian faith is that sinners are justified in no other way but by faith alone in Christ Jesus alone.

These are the individual Confessions contained in the Lutheran Book of Concord:


Warning: Invalid argument supplied for foreach() in /home/spplc/public_html/wp-includes/script-loader.php on line 2841